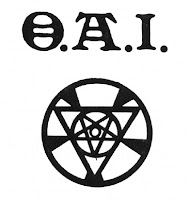 While the Ordo Adeptorum Invisiblum was originally founded in England in 1979, their United States headquarters were established in Chicago in 1981.

From what I can determine, the OAI practiced a form of feminist Thelema.

The OAI also adopts feminist principles and practices—not the anti-male separatist variety—but in its non-sexist androgynous philosophy. Women are not the vehicle of a male seed, a male High Priest. They are magickal people in their own right. The history of female magickal energy is far older than that of the male, but it has been overshadowed by the masculine principle. The OAI seeks to rectify this by balancing the imbalance through women seeking to rediscover and reassert themselves, while male members minimize as far as possible their aggressiveness and dominance. In turn, this will lead to a more directly  visible equality and non-hierarchical structure within the group and in rituals.

The Ordo Adeptorum Invisiblum (OAI) is a British-based thelemicist order aligned
to the Maatian magical “current.” It grew out of the proclamation of the magical
Aeon of Ma (or Maat) proclaimed in 1948 by Frater Achad (Charles Stansfeld
Jones). Maat is the ancient Egyptian goddess of Truth and Justice. The order looks
toward a planetary manifestation of the presence of Maat, whose coming has been
heralded by three twentieth-century trends: the great liberation movements lead-
ing to the recognition of human rights; the attempts to balance male-dominated
Western magic; and the nonelitist androgynous approach to magic practiced by
Maatian groups. In recognition of their acceptance of feminist liberation concerns
and the nonsexist nature of their magical workings, members of the OAI have
dropped the use of common designations of male and female members as frater
and soror in favor of the single designation persona.

The OAI began in England in 1979 in the informal workings of three Thelemic
magicians (two women and one man). In 1980 they made a formal alignment to
the Aeon of Maat and thus the OAI came into existence. At the end of the year, the
three original members separated. One went to Fez, Morocco, and the following
year, one came to Chicago, where the first members of the OAI were received.

The order has developed as a very loose confederation of otherwise independ-
ent magicians pursuing their own magical experiments in alignment to the
Maatian Aeon. Periodically, members will gather for group rituals. New initiates are
received after their successful performance of Liber Samekh He, a revised version of
Liber Samekh, a Thelemic ritual designed to promote conversation with one’s Holy
Guardian Angel (higher self). The order is nonhierarchical. Leadership can be exer-
cised by any member and teaching is a matter of sharing the results of individual
ritual workings with the larger membership. All members have access to all mate-
rials possessed by the order.

Membership: In 1985 members of the order, reported to number less than 100,
could be found in England, the Chicago metropolitan area, and California.


While their history and manifesto is easily found online as a PDF, their many other writings are much more difficult to find.  I've yet to find a listing for their Chicago headquarters, or any other information for that matter.  As always, those with information are encouraged to make contact.